The real value of museum collections

I heard something disturbing last year while I was at an event held in a museum. Colleagues from other organisations and volunteers were talking to the public about specimens on tables. It was a bustling event, with over 400 people coming along to look at the specimens, talk to specialists, and get stuck into hands on activities. During the event a member of the museum staff (lets call them Jones) went around and told the people helping with the event not to have any drinks at the table. The helpers were cautioned that they should be particularly careful because of the paintings hanging on the walls. Jones even told these external people how much one painting was ‘worth’.

The museum and staff member are remaining anonymous, but this is a true story. There are several things which are wrong with this. Firstly, Jones assumes that volunteers and external helpers were not briefed before the event began with common sense health and safety, and how to work with care around museum collections. Secondly, Jones told volunteers and people who don’t work at the museum how much a painting is worth in money terms!! Incredible!! We do not go around telling people the market value of this or that object – that would be stupid and invite enormous security problems!! My biggest problem was that Jones was very serious in mentioning the ’value’ of the painting; they completely ignored the museum specimens on the table. By warning against damage of the paintings, and giving the cost of one, gave the paintings a greater ‘value’ than the specimens which were being used for the event. 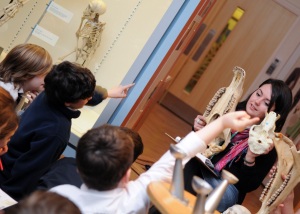 My fantastic old apprentice, Hayleigh, leading an interactive session in the museum about skulls and bones with enthusiastic children.

Museum objects, be they a Picasso or a beetle, should not have a monetary value added to them. We do have to put ‘insurance values’ on objects when we lend them to other museums. This insurance value is the cost of replacing that loaned item if there was any damage. However, there is no way you can replace a Picasso (one painting painted by one man). There is also no way you can replace a beetle (one individual beetle, collected from one place at a certain time by one man). And this is my point. Money will not buy back that Picasso no more than it will buy back that individual beetle. A type specimen can’t be replaced and neither can an extinct animal. All objects that are in the museum collections are irreplaceable and literally priceless.

Giving a museum object a monetary value is wrong. It indicates that these objects are worth some money. And that is not good. They can be targeted by thieves, or worse, they can be sold by the very people who swore to look after them. There have been several examples of objects being sold in order to fill budget gaps, including art work and taxidermy. Why is this wrong? Because it is not ours to sell. Museum hold objects in trust for you, the people. We look after the collections, and care for them, but they are for everyone. It is wrong, because these objects end up in private hands where they will never been seen, or enjoyed again.

By saying an object is ‘worth’ X amount of money, as Jones did, raises the status of that object. Other collections are neglected, relegated to some dark corner, because all the focus is on the big sexy ‘expensive’ object. Of course, all museums have their sexy collections which they like to use; it might be a massive taxidermy specimen, or an object from a known collector. This is what the museum is known for, and there’s nothing wrong with that. But they are because they are iconic, not because they are ‘worth’ lots. These iconic objects are sexy because of their story, not because of the dollars they have over their heads. Giving an object a big price tag means other objects are forgotten about, along with the stories.

Interestingly, the monetary value placed on an object is based on the current market value. This doesn’t actually mean anything for several reasons. Firstly, there is no ‘market value’ for 70% of museum collections, so does that mean they are worth nothing? If an object is damaged or destroyed, as already mentioned, we cant go out and buy that exact same object. What happens when the market crashed; do we suddenly have an object that is ‘worth’ nothing?

A gorgeous, rare oil beetle (Melo violaceus) from the entomology collections at Plymouth City Museum and Art Gallery. Would you give this specimen the same ‘value’ as a work of art?

I have pondered what the solution should be. How should the ‘value’ of museum objects be calculated? Surely, as a museum (a place where collections are held for the public), the value should reflect that? Perhaps we forget about pound coins, and think about what value the object has to Joe Blogs. So, what about we think about an objects value in terms of its potential for inspiration and pure joy?

To measure the value of an object, we can easily work out the ‘joy’ one may get from it. We can do simple experiments (talking to people with our objects, for example) and use the following equation to work out the real value:

Smiles is the length of time (in seconds) a smile is held for whilst talking to that person about that object.

Awe is the length of time (in seconds) the eyes open widely and the mouth drops.

Interaction is the number of interactive questions asked about the object.

Curators reading this may think ‘this is silly’ because actually they may secretly think ‘arggghh, what if my value isn’t high?’ Dont worry, the value will always be high. That’s the point. Whether you are holding a piece of ceramic, an old radio, or a hyena jaw, the value should always be the same. They all have the potential of being awesomely inspiring objects that fit with the above equation. All that object needs is a passionate, enthusiastic museum person to share the awesome stories to inspire the very people we are looking after them for.

(There is the obvious value in research with many specimens, and value for inspiring artists, storytellers, etc. This value can be reflected in the above equation quite easily: the person talking about the object includes it’s many different uses. Research on objects is awesome. Its 100 times more awesome if people know about it!)

When I started thinking about the real value of museum collections, of course I flirted with the thought that natural history collections are supremely valuable. They are popular amongst visitors (as shown by two separate studies: one evaluating London museums, and another evaluating museums with multidisciplinary displays). Events with stuffed birds, pickled creatures and fossils are always over booked. But, after this fleeting 2 second thought, it vanished. All collections in a museum are as valuable as each other. Departments within one museum should not be proving who has the most ‘expensive’ object, or debating who has the more important collection. We should actually all be working together. We have different collections, and sometimes different audiences. But this is a good thing: mixing up collections for displays and events highlights areas that people may not have seen before. It increases the inspiration people get, and automatically gives it value. A value that is more valuable than money.

We care a lot about what we look after. Curators of curtains love curtains (there is a real Curtain Museum). Curators at the Tank Museum love tanks. And yes, those curators at the [real] Museum of Broken Relationships are passionate about, well, the spoils from broken relationships.

Let curators show the true value of our collections.

This post was picked up by the Museums Association after a Twitter discussion between myself and my good friend @MarkCarnall at UCL’s Grant Museum. We were asked to put across our views in a kind of ‘conversation’ style chat (I quite like ‘museum dance off’).

The conversation was published in the Museums Journal, and is also on the Museums Association website – here.

2 responses to “The real value of museum collections”

An excellent source of photons

n. 1. The act or process of explaining about death 2. Something that explains about death 3. A mutual clarification of misunderstandings about death; a reconciliation.

Dedicated to museums big and small throughout London and the world: Comment, Exhibitions, Reviews and Tips

reflect upon how amazing you truly are

Discovering art in everything

I hope to be remembered for my atrocities!

Human history becomes more and more a race between education and catastrophe.

Beauty in the Bones

A curiosity for all things bony

My adventures in nature, no price attached

The latest news on WordPress.com and the WordPress community.