Who is the greatest: Magnum or MacGyver?

One question has remained unanswered for decades. Almost two decades. It is a question that has been hotly debated in the 1990s (mainly in the school playgrounds) and has even been known to continue today (after an ale or two).

There are only two possible answers to the question. Both sides stand strongly by their favourite, with the well-kept moustache or soft, shiny mullet being their symbol of belief. Debates often get fairly heated. Neither backs down. The heart pounds. Sweat forms on the brow. Their hero stands proud. Until today.

Through a little Twitter poll, we will hopefully find out the answer to one of the most ancient of feuds (#tashormullet). It comes down to this: Who is the greatest: Magnum PI or MacGyver?

Both were superheroes for children and adults. Magnum PI and MacGyver were the action series of the 80s and 90s. There was the rather short lived and, in my opinion, forgetful TV series The Fall Guy (with 5 series). The memorable theme tune of Airwolf was the only exciting thing about this rather repetitive action series with the same plot-line in every episode (with 4 series). Even The A-Team, with its extremely big and over the top explosions, only had 5 series.

Magnum PI had a very long run of 8 series, and MacGyver had 7 successful series and two feature length films. Both had fast moving, earworming  theme tunes, exciting plots, and excellent leads. What made these two shows better than the others? More importantly, who was cooler?

Thomas Sullivan Magnum (Tom Selleck) was a private investigator, who lived a luxurious life in a millionaire’s mansion, which came with cars and the famous, strangely loyal, butler Higgins. The mansion was not Magnum’s; he was looking after it for someone whom he worked for a few years previously. So he lived the millionaire lifestyle without being a millionaire. There is a Wiki page all about Thomas Sullivan Magnum (here)– amazing someone got this together with incredible amount of detail.

Tom Selleck posing in his shiny red Ferrari, as Thomas Magnum. The gorgeous moustache and tasteful Hawaiian shirt were trademarks of this private investigator. (Image from Wiki)

Selleck plays the role perfectly; cool, smooth and frivolous, he portrays the rather lazy life of a PI with the expensive luxuries and never-ending women which were, I presume, most male viewers dream. As well as the trademark moustache, Magnum was well known for his obvious lack of fashion sense; Hawaiian shirts. ‘It was the 80s’ I hear people cry – 80’s or not, there is no excuse for those blindingly awful oversized short-sleeved shirts.

Incidentally, Magnum PI ran for 8 series, not because it was amazing, but because the finale of series 7, which was supposed to be the final series, was terrible. It left with Magnum as a ghost. Viewers complained, forcing a more satisfying end to this legend.

MacGyver first aired in 1985 and was a clear competitor for Magnum PI. It followed the close shaves of a special agent, Angus MacGyver (Richard Dean Anderson) on his many missions. The classic MacGyver trait was to use his charm and wit to get out tough situations instead of guns and violence. Often a little bit of chewing gum, a paper clip and his watch was all he needed! There is of course a Wiki page for MacGyver too (here). 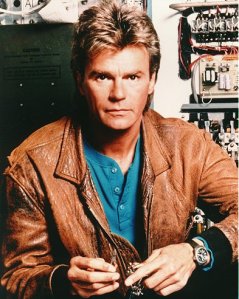 The more serious looking MacGyver. His classic brown leather jacket, and memorable hairstyle stood out against other TV characters. (Image from Wiki)

Richard Dean Anderson is MacGyver and makes the role*. Following along the lines of Magnum PI, MacGyver narrates certain scenes, where he reminisces about his childhood effortlessly linking to how he gets out of the current trouble he is in. His missions were exciting, nail-biting and the ending to every episode was just another ingenious solution to escape from a close shave.

Many TV series that are released on DVD just have the name of the show and the series. MacGyver, however, added a little extra. A little slogan was included.^ You may argue that Magnum PI needed no such slogan to sell its series. Neither did MacGyver but these were slogans people knew MacGyver for. Perhaps Magnum PI should have had slogans too (but then, nothing catchy, or positive, springs to mind apart from ‘His brains were in his moustache’).

Series 2: “His mind is the ultimate weapon”

Series 6: “Braver than most. Smarter than the rest.”

Series 7: “Back in action. Ready for danger.”

So back to the Twitter Poll. Was it the Magnum’s manicured moustache or MacGyver’s meticulous mullet?

The results from the short poll didn’t actually settle the debate. There were 6 Retweets (for Magnum) and 4 Favourites (for MacGyver). There were two people who did not favourite, but replied in favour of MacGyver. The results were;

So, it seems, the debate continues.

Personally, MacGyver was a thousand times cooler. He was awesome. He went on real adventures, with booby traps in temples, top secret military labs, and breaking out political prisoners!  I remember episodes when I was younger where he would show kindness to the bad guys, destroy killer robots with a roll of newspaper and his watch to reflect the laser beams, and use anything he got around him to help!

I was proud when I fixed my watch strap with by manipulating an single staple to hook the links together. Mac (to his friends), didn’t have wads of cash, or a butler. He used his common sense, wits and knowledge of science to get out of trouble! His adventures, were real adventures which everyone wished they could be a part of.

*I wonder if on some subconscious level, this is why I really enjoyed Stargate SG-1? Whereas I didn’t find the character ‘Richard’ in the timeless comedy Friends remotely funny.

^That’s the dream. To have one of those slogans as your signature on your work email;

His mind is the ultimate weapon.

Back in action. Ready for danger.

Maybe one day I will. One day, when I am as cool as MacGyver.

An excellent source of photons

n. 1. The act or process of explaining about death 2. Something that explains about death 3. A mutual clarification of misunderstandings about death; a reconciliation.

Dedicated to museums big and small throughout London and the world: Comment, Exhibitions, Reviews and Tips

reflect upon how amazing you truly are

Discovering art in everything

I hope to be remembered for my atrocities!

Human history becomes more and more a race between education and catastrophe.

Beauty in the Bones

A curiosity for all things bony

My adventures in nature, no price attached

The latest news on WordPress.com and the WordPress community.